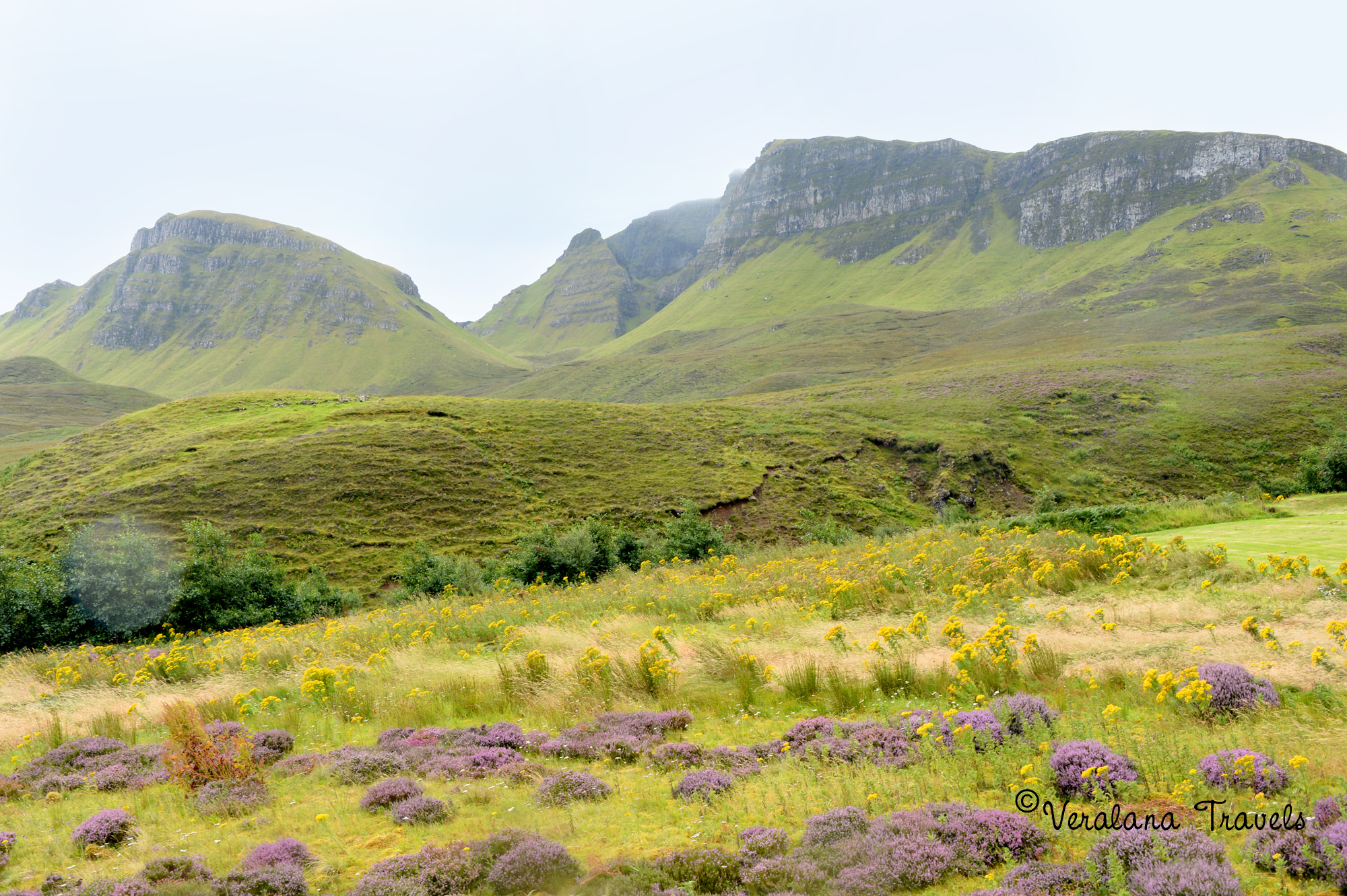 Scotland: Edinburgh and Isle of Skye

Our flight arrived and we were met as promised at the airport by a woman with an Adventures by Disney sign, who led us to our driver. I was surprised at how close he was able to park, but he took our luggage and drove us to the hotel, answering some questions about the local surroundings along the way. We arrived at the Balmoral, checked in at the front desk and at that time received a note from our adventure guides with a brief introduction. We arrived in the late afternoon and missed the information desk hours, so our first introduction to the group was when we met for the welcome dinner.

The welcome dinner was at the hotel and there we met the other families and our guides. Our guides were Michael and Lenora, who have been on the Scotland itineraries all summer. The families were a wide mixture–ranging from families with pre-teens like ours to adult couples with and without children. My children were excited to find out that there were 5 young girls on the trip (including themselves) ranging in age from 8-12.

The guides introduced the trip and we introduced ourselves to the group. We had just arrived that day so were pretty exhausted by dinnertime.

Our first day was in Edinburgh, and we seemed to have hit the city at the perfect time with the festivals in town. There was just so much going on! Our visit to Holyroodhouse was well-timed as to avoid the crowds. Halfway through our tour Lenora took the younger kids (the junior adventurers) and they did their own activity.

I have to admit I was skeptical about going to the Scottish National Museum with two young kids and almost opted to go explore the street festivals instead. However it turned out the that museum isn’t at all stuffy, and there were a ton of hands-on activities for the kids. They enjoyed the period dress-up and activities in the historical side, and probably the technology exhibit even more, where they could learn to program robots and drive race cars. We had a nice lunch in a private room at the museum and got a great rooftop view of the city.

The next stop at Dovecot studios was also a pleasant surprise. It was hands-on for the kids and adults. By that point I had learned to trust in the Disney magic and their choices for activities.  The group learned about weaving and we took turns weaving part of a large ABD tapestry.

That day we also got an overview of the city by bus, and went up to Edinburgh Castle. This was our first of two visits there with the trip. From what I understand, some other groups don’t have the second stop there for the farewell dinner, so we were lucky to have that.

We had the evening in our own that night so I had booked tickets online (months in advance) for the Edinburgh Military Tattoo. I had read on the DIS boards that this was worthwhile, and it was wonderful! The only problem we had was that being our second night, my younger daughter kept falling asleep during the performance. It was late and dark, so hard to stay up with jet lag.  I’m glad we splurged for the slightly more expensive tickets to have the castle in the background it was beautifully illuminated.

We spent our second night in the lovely Balmoral Hotel.  Our girls loved the little bears with matching robes that the hotel gave them on their beds, and they appreciated being able to sleep in different beds (one had cot and the other the sofa bed).

This day is the cleverly disguised “we are going to be on the bus for a long drive to the Isle of Skye day”. But they did a great job of breaking up there drive with nice stops along the way. We never drove too long in between “comfort stops”. The first stop was at a roadside tourist trap, but we enjoyed the little shopping stop and meeting our first highland coo (cow).

Our lunch stop was at the small waterfront town of Fort William. This is when we realized that our kids (who were sitting in the back of the bus with the other little girls) had decided that “lunch on your own” really meant small group lunches with the other families with kids of similar ages. That was a nice surprise, and we enjoyed getting to know the other families. We had just about enough time to eat (and this is where I got my first haggis) and then had to get back on the bus. We drove past some highland sights, popped out for photos at the more famous ones, and finally made it to the picturesque Eilean Donan late in the afternoon.

We toured the inside of Eilean Donan castle and took some photos around the beautiful surroundings, and then got back on the bus for the last part of the drive to the Isle of Skye. The Cullins Hill Hotel is the second hotel of the trip, and while smaller, they clearly went out of their way to make our group feel welcome. The view from the hotel is lovely.

The long day ended with the kids joining the adventure guides for a pajama party/movie while the adults had whisky tasting. The whisky-tasting took place in the hotel restaurant (which was just across the lobby from where adventure guides had the kids), and consisted of the restaurant manager giving a short talk about the whiskeys and then trying three different types.

We woke up to have breakfast at the Hotel–I had been waiting eagerly the night before to capture a rainbow over the water in front of the hotel and hadn’t seen one. But when I came down to breakfast, some of our travel companions told me I had missed a rainbow earlier that morning. Bummer. So sorry, no beautiful rainbow photo here. But we did see several rainbows from the coach while driving around. That’s the upside to the rain/sun/rain of everyday in Scotland. Lots of rainbows. And lots of green.

The itinerary mentioned that we would see the The Old Man of Storr. I have to mention this to help with expectations. We saw it…. while driving by on the bus. There was no stopping, getting too close, or taking photos. It was just in passing. But no worries, there was plenty of scenery to be seen and photographed later that day. Here’s the closest I could grab a photo of it (it’s that little spike on the left side of the mountain silhouette).

We took a hike near the Quiraing. It went from overcast to drizzly to downright rainy during the hike, but that didn’t deter us, and it was fun nevertheless. I used a clear shower cap from the hotel to cover my camera, and that trick worked well.

Then we went back to the town of Portree for a little shopping. Here I picked up a beautiful Isle of Skye tartan blanket. I was told by the lady in the shop that the tartan was designed with the colors of the Isle, and I was amazed at how true it was. The greens, browns and purples were exactly like we had seen on our hike.

The day was rounded off with scone-making and highland dancing. The scone-making was a fun hands-on experience. And my younger daughter had an especially fun time because she made quick friends with the baker’s daughter and they enjoyed playing while were were there. I thought this opportunity to spend some time with a local child her same age was fun for her. Likewise, later that evening we got to see some highland dancing from the children from a local dance school. It turned out that is was the first day of school on the island, so many of the parents wouldn’t let their children come perform, and we had a small group. And some of the children were quite young. But they still put on a nice show, with some highland dancing, combined with other local children playing the bagpipes and even a college student who was a wonderful harp player. My girls enjoyed getting to come up and learn some moves with the dancers, who were about their same age. While this was not by any means a polished or professional performance, I think it was nice for my kids to see their counterparts from the island and what they are learning.

This trip review is from our Adventures by Disney Scotland trip.  I book my ABD trips through Archer Luxury Travel.  My camera for this trip was the Nikon Df with a versatile and lightweight 28-300mm lens.