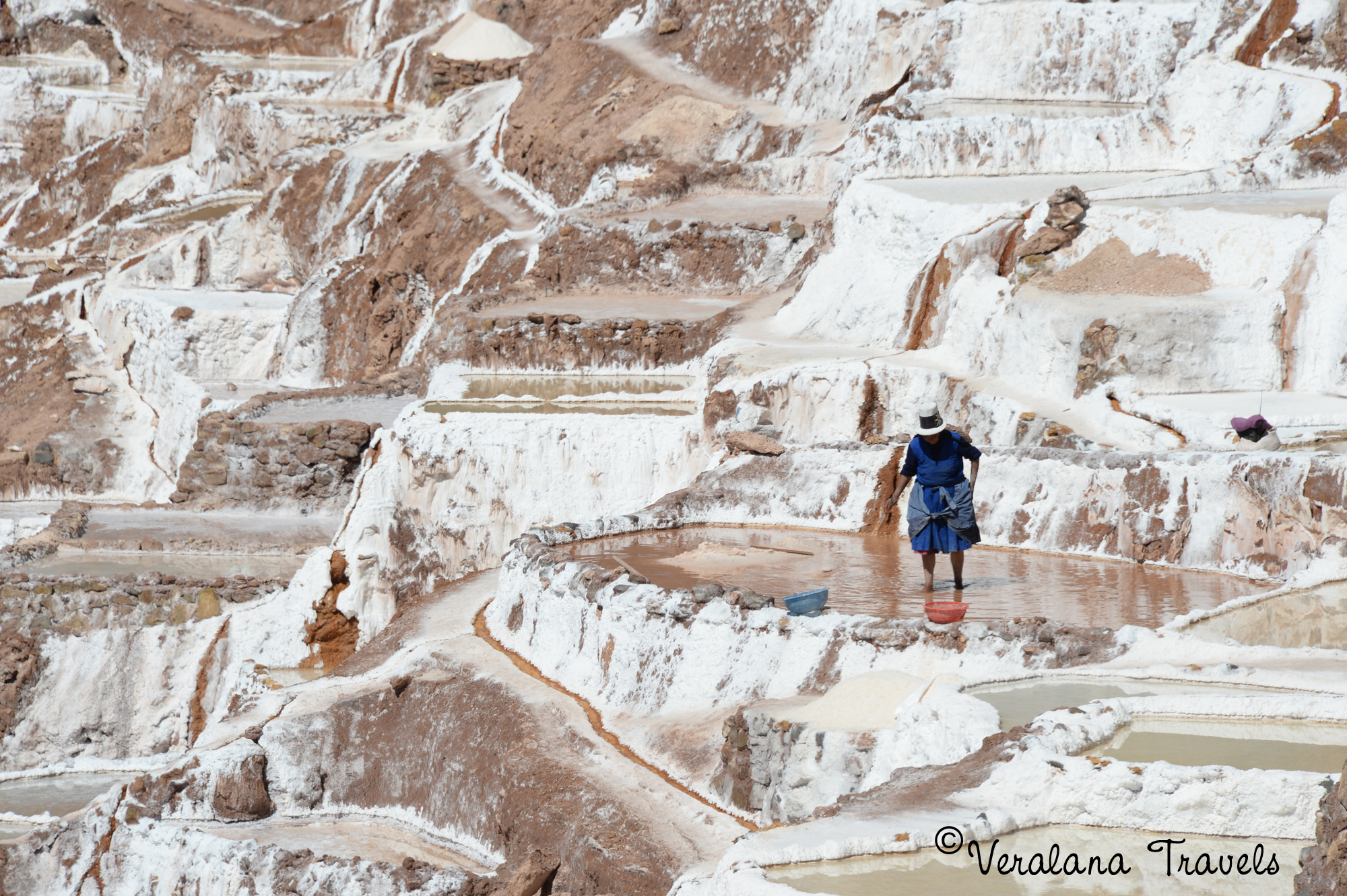 We flew from Washington, DC to Lima on Avianca Airlines through El Salvador.  Our flights on the way in went very smoothly and we arrived on time.  It was late when we arrived into Lima, and we were met at the airport by representatives for Adventures by Disney and taken the Miraflores section of the city and our hotel, the Marriott.  The hotel is right on the Pacific Ocean and across the street from an upscale shopping area, but it was too late when we got in to check any of that out.  We met with our Adventure Guides, Amber and Harvey, and then settled into our room for the night.

We had a buffet breakfast at the Marriott and then met up with the rest of the group for our internal plane ride to Cuzco.

Although we flew into Cuzco, we quickly headed onto our buses (our group was divided onto two smaller buses because the roads in this area can’t support the larger coaches) and started our drive down into the Sacred Valley.

Our first stop was at the Center for Traditional Textiles.  We were met by festively-clad local weavers who taught us about the natural dyes and fibers used in their handmade textiles.  The children in the group got to do a fashion show in local clothing and try their hand at dying yarn.

We enjoyed lunch with some Peruvian specialities (I was a big fan of the chips), and many folks began their regiment of coco tea to help with the altitude adjustment.  One of the younger girls in our group seemed to be handing it worse than the rest, so they put some coco leaves under a hat for her as well.  The rest of the group was a little winded (and in my case I started with a minor headache), but the adjustment wasn’t too bad overall.

The textile center also had a lot of items for sale, and we were advised that this was a good place to purchase higher quality alpaca items, so I bought myself a soft purple sweater.

After lunch we set off on the buses again toward the Sacred Valley.  We made one more stop along the way at a scenic overlook to take some photos.  My daughters were very excited about this stop because there were some enterprising local folks there with some llamas who would pose for selfies for a small tip.  Seeing llamas was high on my kids’ wishlist, so we indulged.

After a little more time on the buses, we arrived at our home for the next few nights, the Sol y Luna Hotel.  I think this may be my all-time favorite family lodging.  Every family had their own little round cabin.  With a family of 4 we got a two-story version with a king-sized bed and bathroom on the main level, and a loft with two twin-sized beds for the kids.  The grounds between the little cabins were beautifully landscaped and connected by paths.

At one end of the grounds there was a restaurant, some horse stables and a parade grounds, and that is where we went for our first night welcome dinner.  We had a traditional Peruvian Pachamanca (which I found very similar to a Hawaiian Luau).  There was dancers in festive costumes telling a story of the gods, with fire and stilts.  In the meantime our dinner was cooking in an underground dirt and rock fire pit.  There was mixed meat including lamb, chicken, alpaca and cuy (guinea pig), along with potatoes and vegetables.

Our second day in the sacred valley started with short ride to Urubamba River for our white water rafting trip.  It was chilly, so some folks opted out of the trip and instead watched from a nearby bridge.  But our family donned the full-length wetsuits and jackets that were provided and headed to the river.  I had read some information that the water in the river might not be safe if swallowed, so we were careful to try not to take any in.  Notice my younger daughter (who was riding in front with the GoPro) taking that very seriously in our photo.

From the river we could see Incan ruins and the length of the trip seemed just right.  At the end of our route we were met with towels and changing rooms where we could get ready for the rest of our day.

We headed into the town of Ollantaytambo, which had been built by the Incans and had great examples of stonework and aquaducts.  We did a little walking around cobblestone streets and enjoyed the architecture, but the town looked like it had become quite touristy, so I was glad we were staying in a hotel outside of town.

We headed over to the Casa Huacatay for an outdoor buffet lunch filled with lots of beautifully displayed local food options.

After lunch we explored the ruins of the once occupied by the Incan Emperor Pachacuti. This was our first encounter with free-range llamas, and the talk of the afternoon was an serendipitous photo that one of the girls in our group got of a llama spitting on her.  We climbed up the ruins and marveled at what the Incans were able to do architecturally with limited tools and technology.

After our busy day, we came back to the hotel and the kids went off with the Adventure Guides for dinner and a movie while the adults ate on their own at the hotel restaurant.  For my husband and I it was a rare table for two on vacation.

We put on our hiking shoes and headed out on the buses to our first stop of the morning: the circular terraces of Moray.  These were used by the Incans for agricultural science, to help develop crops that would grow all all of the varying elevations in their empire.

From there we headed to the salt pans of Maras.  These are Incan-built pools that help capture the salt coming from the mountains.  We hiked along the top of the pans, on very thin and salty ledges, and then hiked over a mile down to the bottom of the hill.

Back at the hotel for lunch we were treated to a horseback display in the hotel’s courtyard, followed by an opportunity for the kids to sit on the horses.

The afternoon was schedule as “on your own” in the itinerary, but we took advantage of the (no extra cost) excursion the guides had planned into town of Urubamba.  We ventured into the local food market where we saw the locally grown produce, including so many types of potatoes.

Then we headed to the home and studio of ceramic artist Seminario.  We got to meet the artist himself and see his work, some of which is displayed in the Smithsonian and at the World Bank.  He even posed with the sculpture I purchased for me, and they carefully packaged and shipped it directly to my home so I didn’t have to worry about transporting it.

Back at the hotel in the evening the adults got some cooking lessons from the hotel’s chef and learned how to make pisco sours, while kids had great fun making a big mess tossing flour while making their own pizzas.  Then we headed back to our cabin for the night, excited about our trip to Machu Picchu in the morning.

This trip review is from our Adventures by Disney Peru trip.  I book my ABD trips through Archer Luxury Travel.  My camera for this trip was the Nikon Df with a versatile and lightweight 28-300mm lens.