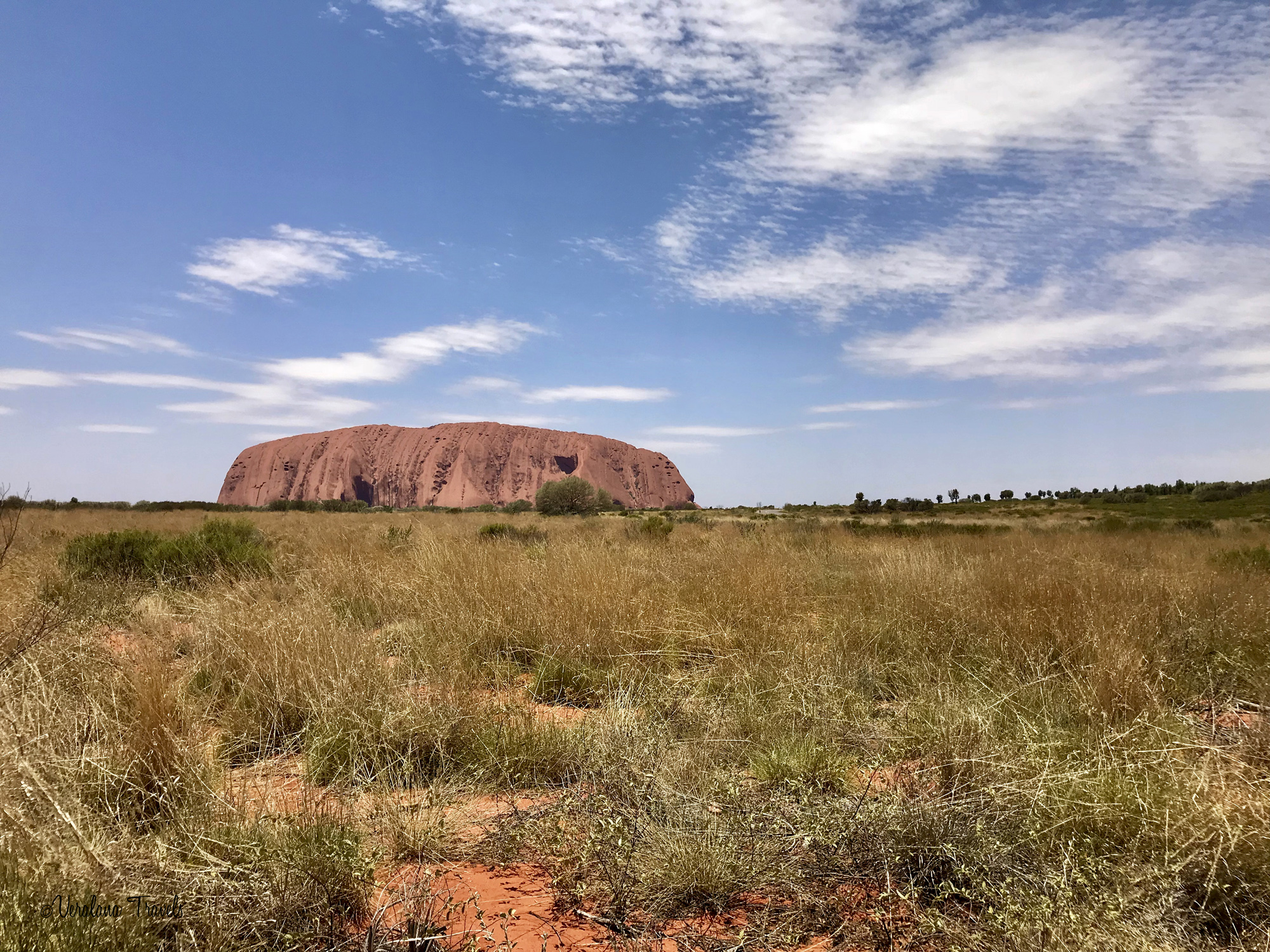 We arrived into the tiny Ayer’s Rock Airport from Sydney after a little over a 3 hour flight.  My window seat from the left side of the plane allowed for some nice views of the rock from above.  We were met by a bus and proceeded to Uluru Visitor’s Center.  We were given boxed lunches, which we had pre-ordered on the first day.  The options were various varieties of chicken (or no chicken) Caesar wraps with chips and water bottles.  It was over 100 degrees, and the visitor’s center is rather open air, so we found a spot in the seating area for the snack bar, which at least had some fans running, to eat.  This was right next to the gift shop, so we also had a chance to look in there.  I took that opportunity to purchase some cooling neck wraps for my daughters in preparation of our hot afternoon hikes.

We had enough time to eat, use the restrooms, and take a quick look around the visitor’s center before heading out on our hikes.  The bus driver had a giant cooler of water under the bus to continually refill our water bottles so we could stay hydrated.  The guides provided us with fly nets, which turned out to be very useful with the pesky flies.

We proceeded to Uluru, where were first stopped for some photos of the whole rock at a distance, and then took some smaller hikes at the base of the rock.  We stopped at a cave with artwork on the walls and at a watering hole.  We got to see the textures up close and learn more about it’s cultural history.

After the visit with Uluru, we checked into the Sails in the Desert Hotel, which is one of the hotels in the Ayer’s Rock Resort Area.  All of the area surrounding Uluru is national park land, and the small village where visitors can stay is all operated by the Ayer’s Rock Resort.  The Sails in the Desert was a nice facility, and very close to the small shopping/dining area.  We were given two rooms across the hall from each others, both with two queen beds.  One room had a view of the bush, and the other a view of the pool/courtyard area.  Upon arrival we had about 2 hours to freshen up before meeting for the buffet dinner at the hotel.  My kids went straight to the pool, which they seemed to enjoy, but some of the adults who went reported that it was pretty dirty.  I used some of this time to explore the shopping area, but found that most of the shops had closed at 5pm.

The hotel’s buffet is a combination of buffet-style food and grilled-to-order meats.  We had the option to try kangaroo steaks here, so many folks took that opportunity.  The chocolate fountain was definitely a highlight of the dessert section.

After dinner the group met up again for star gazing.  We had two guides who led us to a spot out behind the shopping area where they had  set up chairs and telescopes.  They pointed out the highlights of the southern sky, and set up several things to see through the telescopes.  I had brought a tripod and remote control to try to take some long exposure star photos.  I was able to get some photos of the sky, but my star trail attempts were foiled when a strong wind kicked up and was too much for my lightweight Fuji camera and mini-tripod.

After a late night of star-gazing, the adventures picked up again super early the next morning, and we had to be ready to depart for our sunrise camel rides by 4:30am.  After being so hot the night before, we underestimated how chilly it would be in the morning, and some of my family could have dressed a little warmer, but in general folks went in t-shirts and pants.  It was such a cool sight to see all of the camels lined up and kneeling ready to start the ride.  They lined us all up with our camels, and we rode in pairs.  The camels are all attached in a line by rope, and they march along much more calmly than was our experience with horseback trail rides.  My daughter and I rode Cusco, who we learned had been raised there since childhood and was a little stubborn as a result.  Many of the other camels are apparently caught from the wild as adults.

Then ride took us out for a view of the sunrise with Uluru to the side.  We had a bright red sunrise, which was pretty to watch, but while were were able to bring cameras along, the views didn’t make for any particularly stunning photos.  Kata Tjuta in the distance was actually more beautifully lit than Uluru.  I brought my lighter 18-55mm lens, and might have been happier with a longer range, although not  sure I would have wanted to carry it.  The ride itself was very nice and the guide walked along side of the group and provided information about the camels and their history in the country along the way.  The guide also was willing to take photos of us on the camels with both the Disney guide’s camera and our personal cameras.

When we returned to the camel farm, we were greeted with freshly baked beer bread with a variety of topping options, and hot drinks like cocoa, tea and coffee.  They have a rescue program at the farm which houses a couple kangaroos, a water buffalo, and a baby camel and we had a chance to visit them before we headed back to the hotel.  A word of advice if you want to try a selfie with the baby camel: he may try to eat your shirt.  I speak from experience 😉

After arriving back at the hotel we had another couple of hours to pack up and head to the buffet for breakfast.  We checked out of the hotel before heading out for our second morning activity, a visit to Kata Tjuta.  The morning temperatures were much nicer than they had been the day before.  It was still hot but the winds helped with making it more reasonable.  The hike up the Valley of the Winds felt a little like walking on Mars with the red rocks.  It ended in a ravine which was green with vegetation.  We took some photos and then doubled back.

After our hike we headed back to the resort area where we had a few minutes to look around the shops before meeting for lunch at the Gecko Cafe.  Lunch was served family style and was Italian food: salad, pasta and pizza.  After lunch we headed for the airport where we checked in for our Quantas flight to Cairns.

Upon arrival in Cairns we boarded a bus to Palm Cove.  Our hotel for the next three nights is the Pullman Palm Cove.  It is a beautiful beach resort with apartment rooms, complete with kitchens and laundry facilities. Our family got a 2-bedroom unit.  One bedroom had two twin beds and the other had a king sized bed.  Each room has it’s own bathroom.

This evening was junior adventurer night, and also happened to be my daughter’s 14th birthday.  The guides helped her celebrate with the other kids, while the adults had a pool-front dinner at the hotel’s restaurant.  We had pre-ordered our meals for the evening upon arrival on the first day of the trip, but by now most of us had forgotten what we had ordered.  My husband had ordered beef, but mentioned that if he had realized how much beef we had on the trip so far he would have chosen the fish instead.  Nevertheless, the food was very good, and by the end of the three-course dinner everyone was ready to head off to bed after a very long day.

This trip review is from our Adventures by Disney Australia trip.  I book my ABD trips through Archer Luxury Travel.  My camera for this trip was the Fuji X-T20 with with the 100-400mm lens for wildlife and the 18-55mm kit lens for around town (as well as my trusty iphone 7). 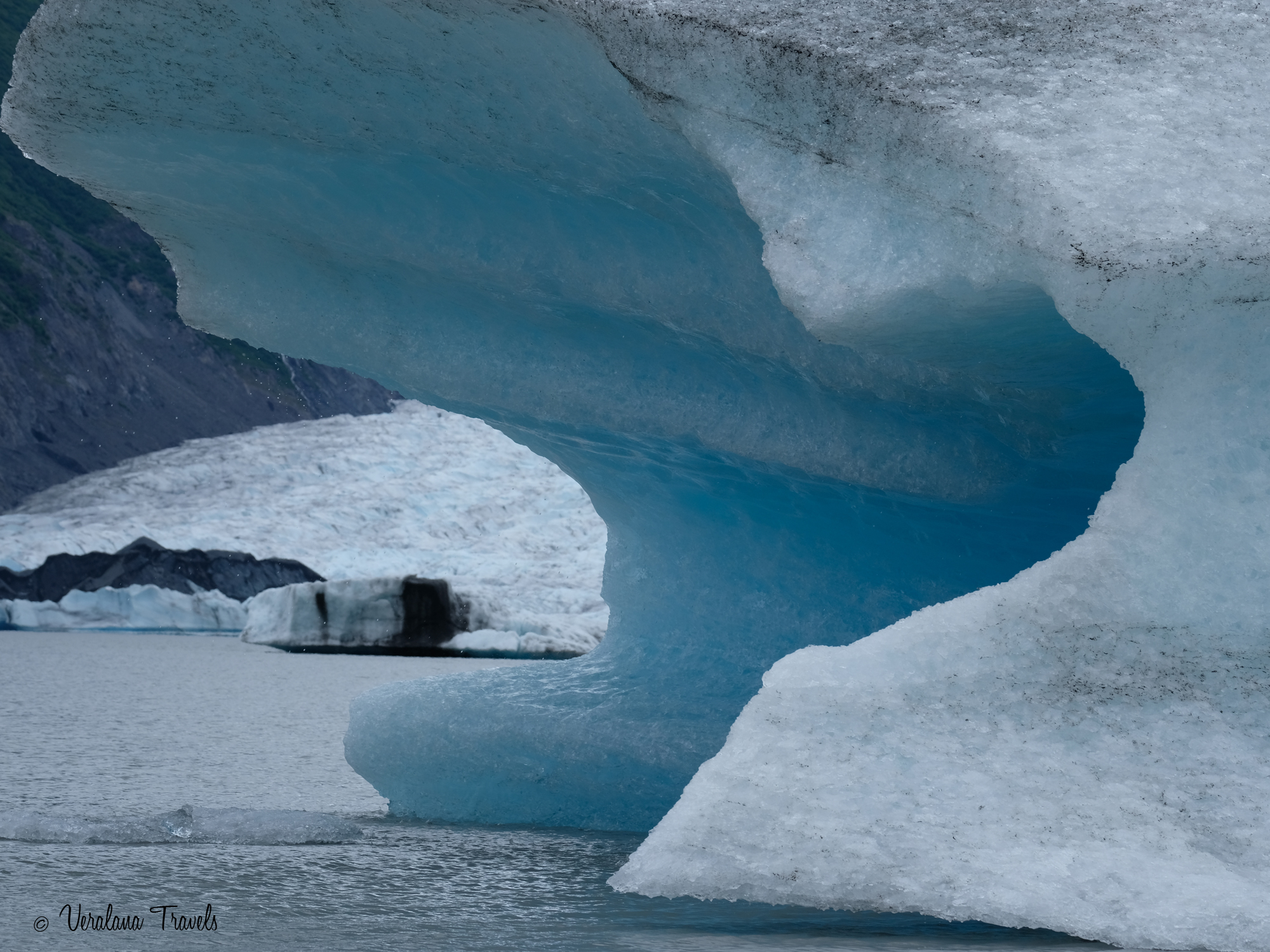 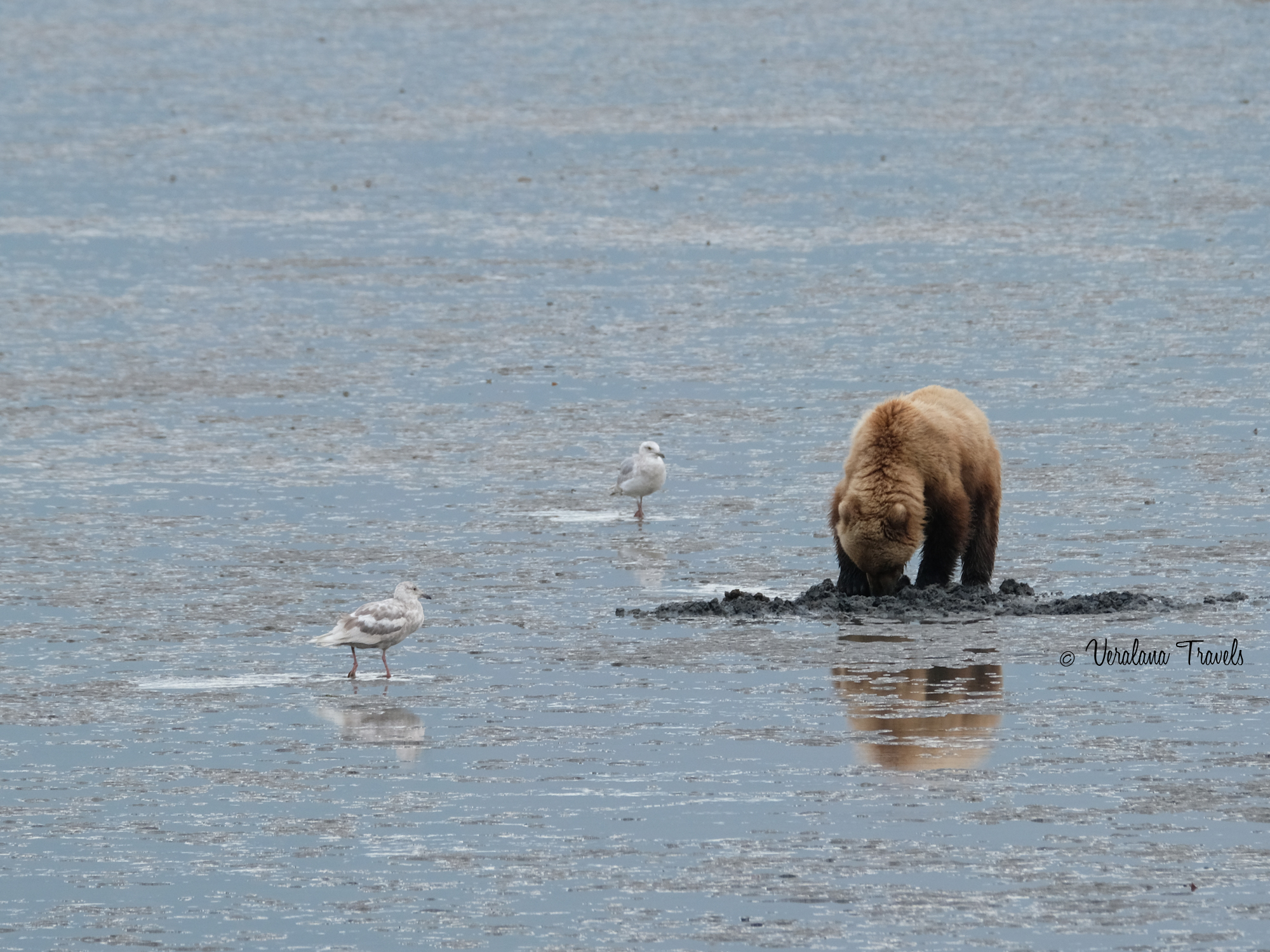